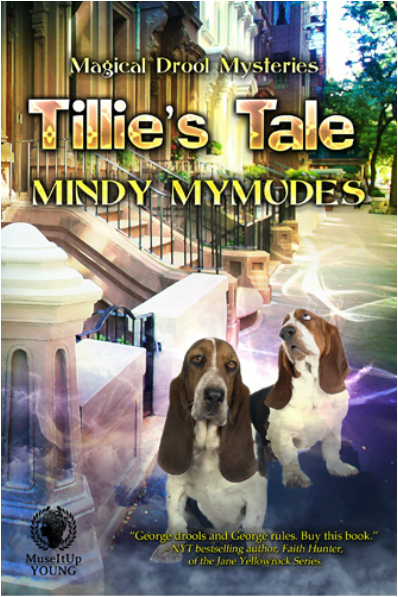 Who is the mysterious ghosty haunting puppygirl Tillie? And why? George the magical basset hound familiar is on the trail.

5 Star Review:
By Melinda Hills for Readers’ Favorite
Dogs are man’s (or a kid’s) best friend but when that dog is magical, the relationship is even better! Tillie's Tale by Mindy Mymudes is a new volume in the Magical Drool Mysteries series that has George, the witch’s familiar, tracking down the reason a ghost is haunting the puppy Tillie. George, with the help of his girl pup Karly and Karly’s Green Witch Auntie Heather, investigates the background of the little girl ghostie that has attached herself to Tillie. By using magic spells and following his incredibly sensitive nose, Karly, Auntie Heather and George track down the apartment where the little girl lived almost a hundred years ago. There, they meet an old woman whose parents had owned the building and they discover some amazing facts about the history of the area, one of which is that bullies are nothing new. How will this group solve a mystery that is so old? Can their magical powers point them in the right direction or is it really too late to give this ghost some peace?
If you are interested in a fun-filled adventure with magic, ghosts, human interest and a bit of history thrown in, this is the perfect book for you! Tillie's Tale combines a love for animals with the whimsical workings of a Green Witch and her apprentice, as well as a touch of history, all told from George, the magical dog’s point of view. This volume of the Magical Drool Mysteries series, Tillie’s Tale, is highly entertaining as well as informative and a delight to read.

Tillie’s tail is spinning in circles. She’s staring at a filmy thing sitting on the steps of an old, rough-brick building. I know it’s really a large Peeps’ den, but since it’s bad to be in the dog house, I assume it’s bad to be in a house. Why don’t they just call it a den if houses are so bad? From the smelltaste of cooking, Peeps, dust, skin, and the other stuff Peeps like, there are many small dens inside. Tillie “wrrrrrtttles” again and adds a soft “wuff.” Her front goes down into a play bow. The thing she’s trying to get to play is shimmery and clear, with thick and thin spots swimming on the surface.

I turn to Tillie. That’s a sound I haven’t heard before. She makes it again.

Tillie’s tail is spinning in circles. She’s staring at a filmy thing sitting on the steps of an old, rough-brick building. I know it’s really a large Peeps’ den, but since it’s bad to be in the dog house, I assume it’s bad to be in a house. Why don’t they just call it a den if houses are so bad? From the smelltaste of cooking, Peeps, dust, skin, and the other stuff Peeps like, there are many small dens inside. Tillie “wrrrrrtttles” again and adds a soft “wuff.” Her front goes down into a play bow. The thing she’s trying to get to play is shimmery and clear, with thick and thin spots swimming on the surface.

Tillie bounces closer and stops. I follow, now that I’ve smelltasted it. It’s not a Badthing, but it could’ve been. Tillie needs to learn that not everything is okay to play with. Plus, it’s not polite to get the Boypup in trouble. At least this thing is just a ghosty, not a Horrible Hodag. That was Joey’s last friend. I shudder. Dragons don’t make good friends.

This ghosty seems safe enough. I’ll have to get closer to make sure. I cross in front of Tillie, careful to not let the Peeps’ leashes get tangled. I hate it when they get wrapped under me and around my legs. It’s sort of fun when it happens to the Peeps, though.

Oh no. “Ah. Ahhhh. Ahchooo!” There are undertones of babypowderbittermums smelltaste. The thing looks like it’s wearing a dress. Its hair is in a tail with a ribbon tied into a bow. I think it’s a ghostygirl. Sometimes it’s hard to tell. One thing I do know, the young ones always need something. They can be almost as naughty as poultry ghosties.

When I was the same size as Tillie, I had one follow me home. It hung around my supper dish. Eating through a ghosty is irritating—they’re all cold and slimy inside. It only stayed a few days. It would’ve been shorter if it’d tried to eat my dinner. I would get very grumpy if a ghosty tries to eat my supper.

No, Tillie, don’t play with the ghosty. “Arrooo,” I bay in frustration. We don’t want to invite a ghosty home. “NoooOooo.”

She ignores me and tries to lean on it. That’s not a good idea. “Rooo!” Leave it!

The puppygirl falls through the ghosty and the ghostygirl cries without sound. Big tears roll over her face and splash on the ground. They don’t leave a trace.

I shake my head, flapping my ears over my eyes. No, this isn’t going to be good.

“What’s Tillie doing?” Joey is kneeling through the ghosty and stroking Tillie. Tillie gets up and tries to push him away. They both fall over. The ghostygirl continues to cry, ignoring the pile of living creatures in front of her.

Her feather-light touch follows down our link. Ah, that’s what she wants. I didn’t think she was using my eyes to see her reflection. Nope. She wants to use my superior senses. I let her see the ghostygirl sitting in front of us. That’s the advantage of having a familiar. We can share our senses. As if I wanted to use Karly’s. All those colors are very distracting. That’s why she uses my eyes, ears, smelltaste, and touch. Humans are senseless.

Karly shrieks. Her eyes are round and wild. Her hair looks like a dandelion poof. I don’t like dandelion poofs. They go up my nose. She jumps back and yanks on her leash. My head is jerked to the side. Ouch. Didn’t expect that. I give her a basset stare-of-death. Unfortunately, bassets aren’t made for stares-of-death. We are a friendly lot, for the most part.

“What?” Joey asks, looking around.

“Mmm…mmm…maybe we should go home.”

What? I am certainly not done with my walk. I pull toward the park.

Joey pulls Tillie to the grass strip between the sidewalk and the street. Yucky car path, it smelltastes bittersaltcarfarts. She leans forward in her collar, pulling like a sled dog. Nice. I give her a B for effort. Her style is promising. When she grows up she’ll be at least an A-.

Oh mousefleas, she’s trying to stay with the ghost.

“Aroooo!” Tillie, no! I bounce on my toes. She doesn’t get it. I pull Karly slowly to the ghost. My Girlpup is dragging her heels. I thought she knew enough not to pull. Sigh. Peep training never ends. C’mon, I need to get closer to the puppygirl before she gets in more trouble.

I quickly back up, slide my head out of my collar, and bump Tillie away.

I can’t tell Tillie why it’s a bad idea to make friends with the ghostygirl. 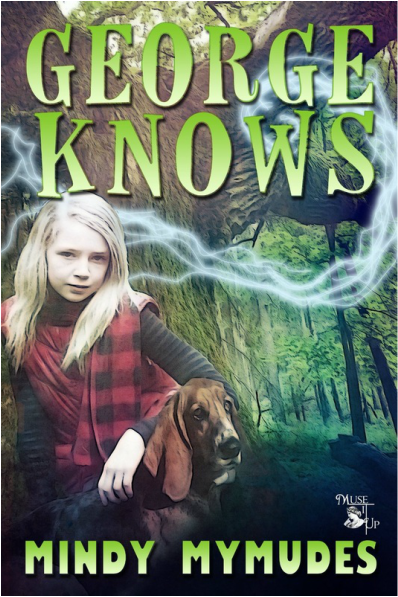 An egotistical magical basset hound named George believes it's his duty to train and protect his 12-year-old Girlpup, a greenwitch named Karly. He and his Girlpup must solve a murder as well as save their park from being developed. George is the perfectly designed familiar for the job.

"Five Stars"--Reviewed by Mamta Madhavan for Readers' FavoriteMindy Mymudes
The theme is original and refreshing. George's antics and humor will remain in readers' hearts long after you finish reading the book. The book has a bit of mystery, fun, humor, and a lovely relationship between George and Karly. I recommend this book not only for children, but also for adults. The affable characters and the original theme make it a good read. 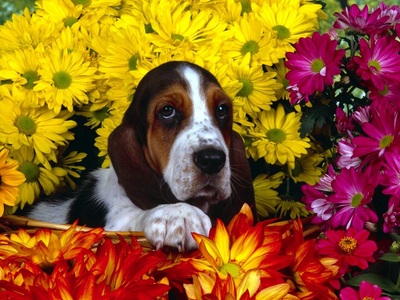 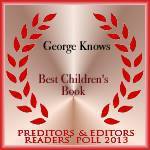